Art. 273 Charity Foundation wants to influence the public opinion of human trafficking. To rise the awareness of those criminal activities and issues around the world.

Did you know that Human trafficking is the fastest growing crime in history?

“Next to arms and drugs, also the most profitable. There are 27 million people sold across borders into slavery today. 50% of the victims are minors, roughly 80% are girls and women. That’s about twice the combined population of London and New York. Experts say it would take 25 years to end human trafficking and slavery. But only if we join forces. We have to reverse history!”

It is a serious issue, the stories are horrible. Especially when you hear it personally. Things happens in the world and sometimes it could be so horrible. Then you realize how lucky most of us already are.

My Dearest Mastermind is an initiative of Chung Dha Lam, he wrote the script and basically made this short. This charity film is to fight against human trafficking to raise the awareness of this happening. It is a local project for the fund raising Charity Event. My little contribution is to volunteer the leading role.

I was first asked to direct this short. But things changes very fast, and instead of behind the scene, I am now in front of the camera. It is a good experience.

First of all, we all voluntarily participate in this charity project. There is No budget, which means; no expense allowance and candy’s for dinner. To me, it is mainly to support this charity event.

Today, I started with a meeting in the morning for next weeks Chinese New Year event. After that I rushed to my Wushu class to give lesson to my kids, then again, rushed to The Hague for filming or actually acting. I was sooo hungry! Didn’t had time for breakfast or lunch. In the car I took a piece of cake which I had from the birthday girl.

The location is like a hospital, a center for rehabilitation or something. But with nobody in the rooms and office. Of course it is Saturday day off. The location was reserved for shooting. I was reading my script which I received the last night. Luckily there is not much speaking in this film.

Finally, we were 5 hours on the set and we just shot 12 minutes and 4gb the first day. It is way too slow.

I’m tired after all the work today. My back tooth hurts. When the mandarins were eaten, there was only candy on the table to still the hunger, so that’s why. I was shocked when I checked the call sheet for Sunday. The call from 12.00 which is heaven, but we were expected to shoot till 01.00? How come? It is not that much filming I suppose. But I believe we will shoot faster than the first day.

I’m not telling too much, this short film will be launched online. So I’ll post it when it’s done! But I can assure you the nice images, beautiful exposure in the film!

Now i’m leaving you, i’m going to the premiere at The Hague stadhuis for the Charity Fund Raising Event.

I’m wondering how much money we can generate for this charity fund! 06:30 am – The day started very early in the morning. It is still dark and grey outside. I didn’t had much sleep, and so are Koon & David. They took a nap while listening to the warm relaxing ballads. It was so quiet.

The building use to be a warehouse. When we entered the building, it really gives you the underground feeling, dark and dirty, there were graffiti on the walls, broken bricks, just the right place for criminal activities. I have one word to describe it, creeeepy. The room where we stayed was called the Death Room, sounds good right? It looks like a crime scene, just like in the movies. Wit the blood on the wall it looks like a SAW movie scene. There we stayed for like half a day after the make up and dressing, waiting for the cast call. But it was very very cold, It was like freezing. We have a small heater in the room which didn’t produced much heat. We were all sitting around the heater. There were also such a thing called hot hands, which are warm packets to warm up your hands, but some put it on the neck, and some in their shoes. We pass that around to keep people alive till the shoots are done. The best thing is the gas heater, which looks like this! But it makes a lot of noise, so every time we were rolling the heater needs to be turned off. I thought I have clothed well for the set but double pants is probably not enough! My toes were frozen!

We went outside to have some fresh air and went to the theater at the corner which is luxury to us at that moment . . sure that the director wouldn’t like that but the whole crew were going to this theater for the toilet. It was like heaven, clean bathroom, comfortable sofa’s, lounge music, everything to relax for a while =) Check out the video by clicking above picture

One last scene to go today. We’ve been waiting for another 4 hours, and at the end, we’ve been told that we can leave. My dear!

20.30 pm – After all it was a long long day without daylight, locked up in the death room, for some a nightmare. But I’m happy that the Wu Dao Dragons had the chance to play in this movie together.

In life there are ups and downs, you can’t always count on the good things. On the long run, you might benefit from it. Just like a cup of thee, some are bitter and some are light. If you never tried the bitter thee, you wouldn’t be aware of how good the other cup tastes. So here we are back in the Death room, as you can see the blood patterns are still unchanged. I had an incredible good night sleep. Packed in twice as good as yesterday to assure not to suffer like we did yesterday. A good night rest makes the difference! wow, I’m so energized!

Here are some pictures with the AK’s. Never thought I will shoot with an AK-47 Rifle, for the first time, it feels great!! and damn what a noise! It is a pity that David didn’t came with us, he had to prepare his sis birthday party for tonight! And we will be attending for sure! with the make up =P

On the set we had to take off our clothes in the T-shirt like in the summertime, but in fact we were  trembling from the cold! 13.00 – We’re done! This is really amazing! Good planning! Yesterday was like hell, and today it’s fun! And no death room anymore. We can go home =) 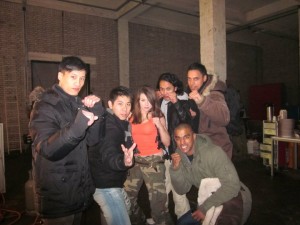 We went to Chinatown and bought some delicious cakes, especially the egg tarts, hmmmm yummie! So this is our nice ride, and we’ve got a good Limo driver too. Let’s rock n roll! Shooting day 4, I lost my 2 mates. This is the blood they left behind. Today I had a fight scene, well I wouldn’t say fight scene myself, it is more a fight shot. Wish it could last longer than it is. Too tired to type anymore, still need to drive back to Utrecht.

This movie goes to the Cannes Film Festival and will be released in theaters hopefully by the end of this year.